This weekend saw howling winds as Storm Desmond battered the UK. Speedsailing legend Dave White has taken the lead in the UK GPS speed rankings with a blistering 44.86 Knots at Southend on Saturday. We caught up with Dave for a few words after his session. Having recently returned to speedsailing after injury, it sounds like he is just getting started…
“For those that don’t know Southend’s Ray speed strip, it has two courses, the western course well over an nautical mile while the easter course falls well short. It still has a 500m strip of water that is truly world class. 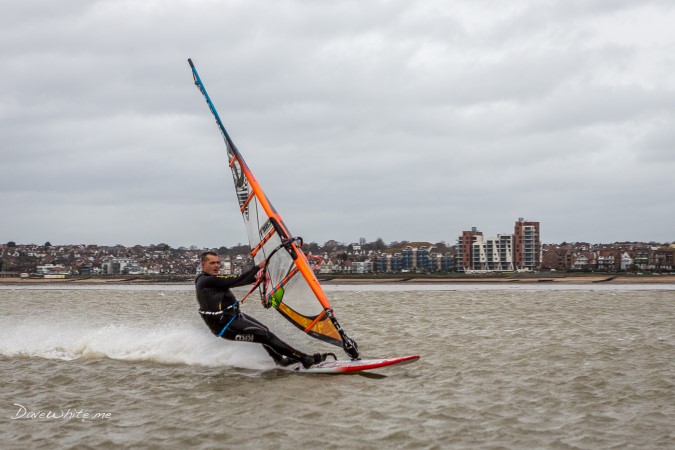 Frustratingly the wind angle and strength wasn’t ideal for either, leaving the best runs to be had just off the corner where the two courses meet, making your 500m inconsistent.
I’ve been wanting to get back into speed for a while and this time last year I had RRD make me a board just to check it out but unfortunately never got to use it as I snapped my achilles tendon at the photoshoot in Cape Town, so the first time was couple of weeks ago.
The first day on the water was more about checking my mind was still in the game, nothing worse than fear holding you back, I’m pleased to say I’m still stupid. Next goal was to test kit, I’m actually waiting for the new Firewings to come out of production so for now I’m using the 2014 5.7 but that ok as my focus was on fins. I’ve always worked with Steve from F-hot and we had a couple of foils and rake angles to test which isn’t so easy at the Ray as everything has to be taken across the water to the bank, though we had a solid four hours of play.
This is where the Ray’s multiple angles comes into its own so rather than just work on the ideal speed spot, I mixed it up with some runs over the chop before hitting the sweet spot and then off around the corner to run the tight eastern section. This gave me a better understanding where the benefits and negatives between the fins were. Next on the agenda is to grab a seat harness and a weight jacket, yes, even at my size a weight jacket works. Even with the wind still a little light having my camera kit on my back was enough weight to give that settled feel. Last time I broke a record the wind was another 25knots stronger than today and I was on the same size sail, so do I think we can go faster? hell yea, just got to get my set-up sorted.”
The last few weeks have seen some serious movement at the top of the leaderboard. With four months of winter left before the Speedsailing year ends in April, rest assured, it’s far from over. It was one of those days that could of gone down in the history books. A rare moment when all the best speed sailors in... It’s that time of the year when the finest gurus of the UK are keen to fill their 2016 dates. Often spaces are limited as...

It was one of those days that could of gone down in the history books. A rare moment when all the best speed sailors in...

It’s that time of the year when the finest gurus of the UK are keen to fill their 2016 dates. Often spaces are limited as...