In the warm sunny first weekend of December Exeter University hosted the first round of the SWA Puravida Wave Trilogy. The SWA wave event format is simple; the students meet in the host city on the Friday night and head to the beach with the best forecast on the Saturday. With Cornwall just down the road Exeter is the perfect place to start this trio. Competitions follow the format of any BWA or PWA event with a continuously running clock and rolling heats.

The students gathered for some catch up drinks on the Friday night with the call to head to Marazion the next morning, where the forecast looked best, with a 7:30am leaving time to catch the tide on the drop. Realising this early start the students decided to take it easy only staying in the bars and clubs of Exeter till 3am before stumbling home. Nothing a bacon sandwich and some RedBull couldn’t fix the next morning.

With a burst of early morning enthusiasm from the hosting Exeter students the competitors were roused on the Saturday and set off deep into Cornwall. Sadly upon arrival at Marazion the conditions were not as epic as the forecast had predicted. However with a few small knee to waist high sets rolling in, a 5.5 float and ride breeze there was enough to get the competition started.

Before Kicking off the competition tour supporters, Jim Brooks from Puravida along with Fanatic and North who kindly sent out Ant Baker, hosted an equipment clinic with the latest kit on demo that the students could even use in the comp!  Sam Ross and Chris Murray from Tushingham/Starboard were also on hand to offer some useful tip’s for the newcomers.

With some very marginal conditions the competition got underway. Fortunately as the heats progressed the wind filled in and the waves picked up. With this year’s standard of sailing at an all time high the twenty-four competitors had to battle hard from the start just to make it through the first round. The competitors showed smooth consistent wave riding ability, neatly interlinking smooth bottom turns and sharp cut back top turns down the line. With incredible series prize of a Puravida custom board and a year’s sponsorship contract up for grabs no one was holding anything back, cutting the best lines they could in the nice easy waves. The crowd of spectators looked on in delight, admiring the talent on display.

As the heats progressed the competition got more and more fierce. Some stand out sailors of the day included Rachael Ince and Jo Wright who both performed exceptionally well in the girls heats showing extremely good wave selection and riding ability. George Bolwell from Portsmouth proved he was a very strong competitor showing an exceptionally high level of consistency in his wave riding ability and demonstrating that he has a few more tricks up his sleeve pulling a guescrew in one of his early heats. He finished second overall and we look forward to seeing what he has to offer in some bigger conditions in the future, fingers crossed for the next two events. Cardiff showed that they are a force to be reckoned with on the Wave series with three of the four competitors representing the Welsh university making it through to the final six with Jony Price from Cardiff finishing third overall. Watch out for the team from Cardiff throughout the rest of the series, especially at the next event in February happening in their back yard at some of the UK’s most pictures beaches around South Wales.

This year’s current king of the SWA freestyle series showed that he is more than capable of wave sailing too. With excellent wave selection all day and consistentlysmooth riding ability Matt Yeats took the number one spot on the day.

After a long day of competition the exhausted students headed back to Exeter hyped for the always memorable SWA event Saturday night party. After some warming food and drinks, the students gathered to watch the awesome ‘Minds Wide Open’ movie. The editor of the film Sebastian Deorr, currently on holiday in the UK, came along to the event and received much praise for his skill in the production of this incredible movie. Exeter had taken a West Country theme for the weekend so the students donned their best West Country themed attire before heading out to Exeter’s infamous Lemmy. Costumes included clotted cream, fudge and farmers. An epic night!

The next morning the students had a lazy start with a long much needed breakfast at a local pub to aid recovery from the previous evening’s antics. The Prize giving was held for the previous day’s competition.

1st Jo Wright – Exeter – Winning a selection of Puravida accessories and a subscription to boards magazine.

The forecast for Sunday again was slightly lacking so there was no more competition running that day. However some students  opted for a quick surf at some local beaches before heading back to Uni.

With the first wave event on the series calendar  now  ticked off, there are  two more coming up soon in the new year, with hopefully some impressive sailing guaranteed. Keep your fingers crossed for some awesome conditions.

See you in Cardiff!

By Will Jones – SWA Head of Media

Thank you to all the sponsors of the SWA this season, especially those that found the time to attend this event. The 2011-2012 SWA sponsors are: 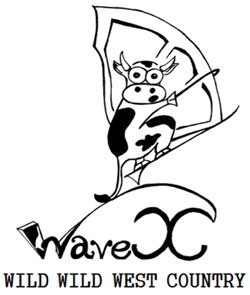 The Student Windsurfing Association’s headline festival Aussie Kiss 10 hit a new level this year.  With the help of the industry, the future of windsurfing...

Student Windsurfing Association media secretary Will Jones introduces the next event on the SWA calendar… For its third year running we welcome back the incredible,...