Dunkerbeck, Voget and Swift go astray on the Dakar Rally…

While Dakar Rally competitors just put the first half of the route behind them and recovered at the bivouac in Copiapo/Chile on their rest day, Björn, Robby and Klaas faced a completely different challenge: sand-boarding in the Atacama desert to put the Crafter 4MOTION to an acid test on behalf of Volkswagen Commercial Vehicles.

The three of them met at 5.30 in the morning to depart for Medanoso, the highest sand dune in South America. They got to the base of the 800 metres high dune just in time for sunrise and the fun was about to start. First, the professional sand-boards specially crafted in South Africa had to be waxed and polished in the desert sand, before marching uphill. Why marching? Didn’t the Volkswagen team tell them to put the Crafter to an acid test? So why walk when you can drive? At least as far as it is possible. After all, they’re all coming down and the worst that can happen is getting stuck. The Crafter 4MOTION performed superbly on the way to the crest, also considering it had to carry the entire equipment of the three windsurfing professionals. Good for the boys, who were saved a long stretch of the exhausting climb and were able to concentrate all their energy on sand-boarding.

Watched by a desert fox the three professionals drew their lines in the sand and boarded down to the foot of the dune. After a short break they carried on to the Dakar Rally bivouac for a quick meet ‘n’ greet with Rudolf Schenker (Scorpions), Dariusz ‘Tiger’ Michalczewski (former boxing world champion) and Jacky Ickx (Formula 1 legend), who had dropped in. Schenker’s spontaneous gig really livened up the atmosphere in the bivouac – and even made the ‘Tiger’ roar

Part two of the trip obviously led into the water – Chile is, after all, a second home to Robby and Klaas, who had their dream houses built here. Klaas Voget remarked, “There are thousands of fantastic surfing and windsurfing spots along the Chilean coast, albeit extremely difficult to get to them. The Crafter 4MOTION really comes very handy here and what is more, it provides room for all our stuff, and there are three of us”. Unfortunately, the wind was a spoilsport and so all the windsurfing equipment went back into the Crafter unused.
Still the three professionals made the most of their lightning visit to the beach. They got out their sand-boards, found a small dune and had some idyllic photos taken of jumps in the sunset. Klaas, an experienced snowboarder, impressed his audience with his stylish tailgrabs. 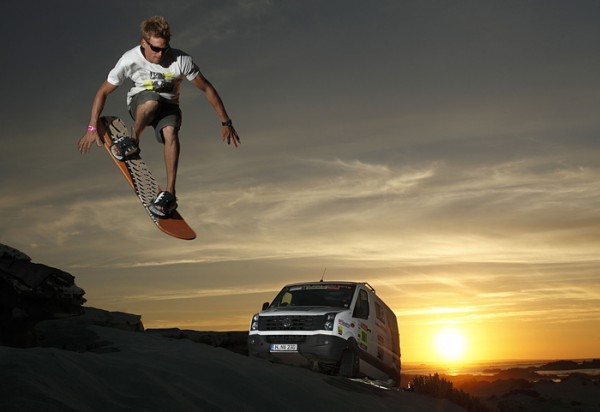 Robby, the only goofyfoot (right foot in front) among them, daringly tried to be regular so that he could also grin into the camera rather than presenting his behind to the photographer. The odd crash landing was marked by cheers. Dunki, for his part, impressed the cameramen with his efficiency, “I’ll give you one more jump. Don’t cock it up. Focus on the pebble over there.” Sure as day follows night, where other guys need ten attempts, Dunkerbeck delivers first time, or does he? But then Björn would not be world champion 41 times over if he didn’t possess the gift of perfect concentration. Robby Swift and Ross Williams make the most of strong winds and a huge swell on Maui… Winter time on Maui often spells the arrival of... Robby Swift and Heidy Clawson were united as husband and wife over the weekend. A huge congratulations go out from all of the Boards team... Robby Swift and Ross Williams make the most of strong winds and a huge swell on Maui… Winter time on Maui often spells the arrival of...

Robby Swift and Heidy Clawson were united as husband and wife over the weekend. A huge congratulations go out from all of the Boards team...