More news from the UKWA who recognise the incredible achievement of Jono Dunnett and his journey around the UK. The UKWA would also like to announce as well as the start of voting for Windsurfer of the year.

A Special outstanding achievement award to Jono Dunnett for his solo unaided circumnavigation of the UK.

During this arduous top he fished for food and sailed with dolphins during the 2,200-mile (3,540 km) journey.

He is the fourth person to windsurf around Britain, but the first to do so without a water-based support team. He began the fund-raising trip on 7 June at Clacton Pier in Essex and and finished there to be welcomed by a huge crowd.

The 41-year-old was inspired by Tim Batstone, the first windsurfer to sail around Britain, with a support boat, in 1984.

Mr Dunnett took advice from windsurfers and a round-Britain yachtsman and “painstakingly risk-assessed” the project.

He also received “some van-based support” and used a GPS tracker.

The longest distance he covered in one day was 100 miles as he travelled along the south coast. Jono slept in a makeshift tent made from his sail, but was sometimes given a bed by people who took pity on him when he was pitching his tent in cold, wet conditions.

He said: “Doing something like this, you appreciate the fundamental niceness of people.“

But he added: “There are parts of the journey, like Land’s End, I would never do again.”

Bob Ingram chairman of the UKWA said “This I am sure you will agree is an amazing achievement but doesn’t sit necessarily in any of our windsurfer of the year categories. But we could not let it go unrecognised, so we are very pleased to make this special achievement award to him. We will be presenting Jono with his award later in the year”. As well as Adam Sims being crowned the 2015 Freestyle Champion, the 2015 slalom champions have been crowned in Weymouth too. After a whole year of... 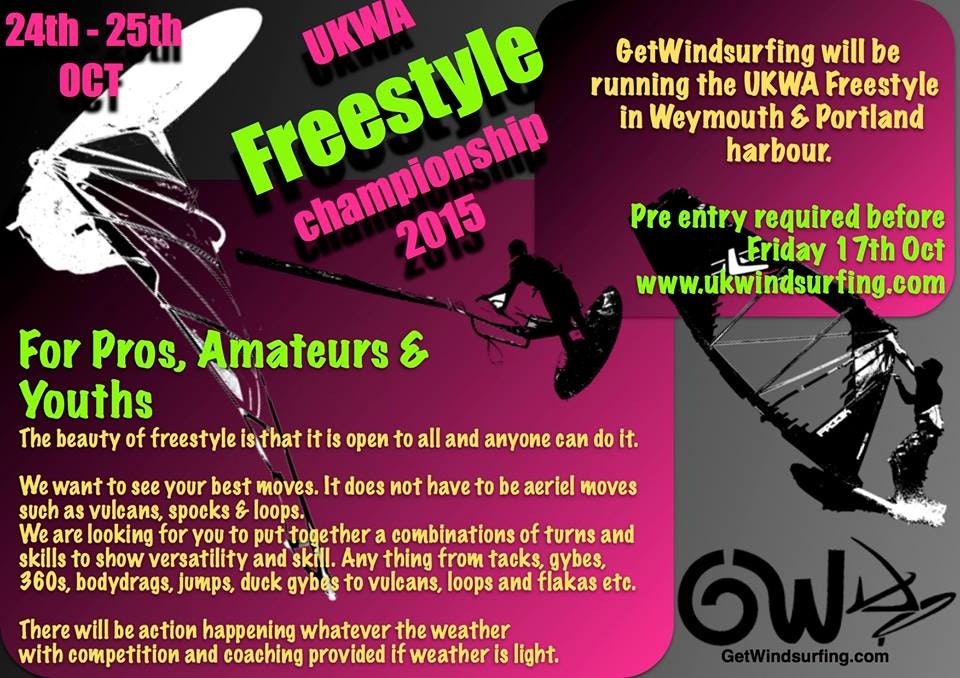 The UKWA Freestyle Championships this year are going to be held on the 24th – 25th October, at the OTC Weymouth & Portland Harbour. There will...

As well as Adam Sims being crowned the 2015 Freestyle Champion, the 2015 slalom champions have been crowned in Weymouth too. After a whole year of...

The UKWA Freestyle Championships this year are going to be held on the 24th – 25th October, at the OTC Weymouth & Portland Harbour. There will...