With sailors coming from the far north, east and west coasts, the UKWA Worthing event started with a sunny first day and the potential for heats to be run in the afternoon. Sadly the sea breeze ended up fighting the days prevailing wind giving unreliable and light sailing conditions. The freestyle was postponed until the Sunday, however the competitors had plenty to do with a few demo Turfdogs to hand. These land boards were in use all day, culminating in an impromptu Turfdog expression session, won by Adam Sims with Oscar Carmichael second. Special mention has to go to 14 year old Carmichael who managed a Turfdog spin loop early on in the session.

Sunday saw the wind fill in providing 20 knots of side shore. By mid-morning it was 5.3 weather and a competitor-judged expression session was called.  There was an impressive display of varied tricks from the competitors in the less than perfect conditions. Adam Sims was the outstanding sailor with some nice clean forwards, a switch kono, double flakas and a funnel.

The main event started immediately after this. In the four man heats the highest scoring pair went through to the next round leaving the other two to compete in two losers heats.  These heats gave the best of the losers a chance to fight their way up for a position in the four man final.

As the event progressed the conditions became lighter and less consistent, making it more difficult to pull many of the ‘new-skool’ power moves. This restricted the scope of the heats with competitors having to rely on the more basic sliding moves.

Youth sailors Sam Conroy, Oscar Carmichael and Alex Mitchell showed an impressive display of skill and level headedness in competition. With their skills and enthusiasm the freestyle discipline will be alive and well in the UK for years to come.

The event only attracted two ladies; Maeli Cherel and Emily Hall, who both sailed well in the demanding  conditions. The quality of their performance easily made up for the lack of numbers with Maeli beating some of the men overall!

In the end it was experience and consistency that won the day with some clean basic freestyle moves needed in the choppy conditions.  Will Rogers and Adam Sims pulled the finishing moves out of the bag when it counted.  In the final heat Will was the victor.  He stayed near the shore so the judges could see his consistently good moves and landings.

‘They were  tricky conditions to compete in….the wind was light on the inside in most of my heats, so I just went for the moves I knew I could do underpowered right  in front of the judges. I tried to make them look as smooth and powered as poss.’

A double heat was run with Sims fighting back hard against Rogers and showing some outstanding sailing. To everyone’s disappointment the wind swung too offshore and dropped forcing competition to stop before the second round was complete.

It was also good to see ex-PWA stars Nik and Ant Baker taking a keen interest in the freestyle.  Helping myself and Trevor Funnell with the judging.

With the full force of the sailors soon to return from Club Vass and other exotic locations we anticipate large numbers and strong competition in the fight for first place at Poole UK Freestyle National Championships on the 10th -12th September – one not to be missed.

Once again thanks to Trevor for organising the event and bringing the UK Freeestyle series back. 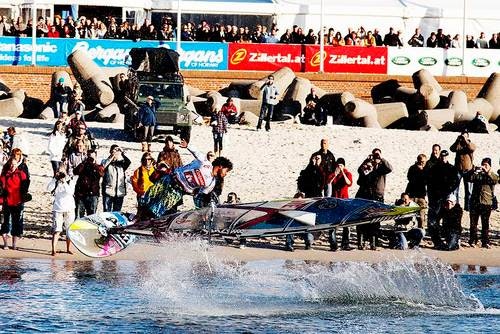 The world’s craziest freestylers flipped the vibe on day five with a spectacular display of tow-in trickery, which saw the king of pop, Steven Van...

The world’s craziest freestylers flipped the vibe on day five with a spectacular display of tow-in trickery, which saw the king of pop, Steven Van... 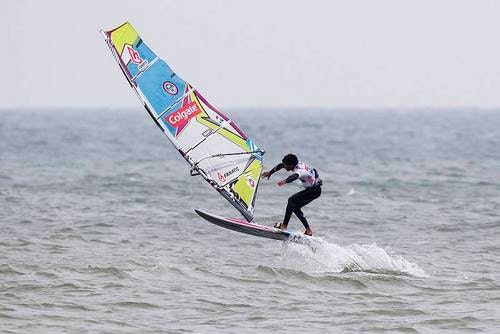