Find out more about the Fanatic Falcon here.

Fanatic’s Falcon Speed 50 sits in the middle of a three board range with a max width of 50 cm. Visually, the most noticeable feature of the Falcon is its funky ‘scooped out’ deck shape, designed to increase control by effectively lowering the height of the mast foot.

It measures, looks and feels the biggest board of the group. The rails are extremely volumous, compared to the other boards and if it wasn’t for the scooped out deck, this would be a pretty thick board overall. The high quality Fanatic straps sit a little more outboard than on the other three boards and higher up due to the more chunky rails.

The Falcon weighs in at a very impressive 4.76 kg, making it the lightest board of the group and nearly three quarters of a kilo lighter than the Mistral and Tabou.

Tail width is the widest of the group, which goes a long way to explaining its bigger feel on the water. Fanatic quote the sail range as 4.5-7.0m. We felt like you wouldn’t want to go much smaller then 5.5m on it and at a push you could go a little bigger than 7.0m.

There is no escaping the fact that the recessed deck is a significant feature of this board, both visually and functionally. As soon as you stand on the Fanatic Falcon, you notice the unusual sensation of your front foot being positioned within the deck recess as you try to gather speed and get back into the straps. It’s an unnatural feeling, that even over the time we had the Falcon, we were unable to become completely comfortable with.

Surprisingly, despite its size, the Fanatic Falcon was the slowest of the four boards to get going on. The reason for this was three fold. Firstly, the board had less lateral grip, so had to be headed off the wind more to get grip from the fin, secondly, the deck shape made foot position (when out of the straps) more awkward and thirdly, the foot strap position is more outboard on a steeper rail shape, which made getting into the straps a little more technique heavy than the other boards.

That said, once in the straps and planing, the Fanatic accelerated rapidly thanks to its incredible light weight and lively, frictionless feel.

In the right conditions, i.e. flat, broad and at speeds in excess of the high 30s, the Fanatic is right up there in terms of speed.

Tight reaching into the start of the speed run, the Fanatic was the most lively of the group underfoot. Despite the supposed control virtues of the recessed deck, there is no doubt the Fanatic has the least control of the four boards when tight reaching or in chop. This difference was most apparent when we sailed these boards on the open sea…the Fanatic was fast, if you could keep it in check, but keeping it in check for any length of time was near on impossible. Compared to the other three boards, the Fanatic was unable to stabilise and find a flat spot to ride on. Instead, it felt extremely lively off the tail , bouncing from chop to chop and trimming and hunting from side to side. It’s fair to say that our Clones needed a few shots of morphine to calm down after riding the Fanatic in chop!

However, getting going, tight reaching and sailing chop is not what the Fanatic is designed for. We were told by top speed sailor and Fanatic Team rider Peter de Wit that the Falcon sails more loose, but stabilises once over 70 km/h (38 knots).   So when we finally got a chance to point it down a flat speed course, well-powered up on the 6.4m Pryde Evo 7 we watched with interest!

If you are a strong, skilled speed sailor, who sails predominantly on ultra-flat water and consistently at speeds over 40 knots, then you will find the Fanatic an exciting and rapid prospect…

Peter was right; pointed broad on flat water, at decent speeds, the Falcon does indeed stabilise. In fact in some ways it feels like it gets a bit of a personality transplant. Gone is the flighty, lively, hunting feel, which is instead replaced by a much more directional and planted ride. There are still hints of its former character, but generally, its a much more useable and comfortable board in these conditions and at these speeds. It’s fast as well. It has a very light and frictionless feel to the way it sails and felt at speed like it was one of the sharpest to accelerate in the gusts. In the right conditions eg flat, broad and at speeds in excess of the high 30s, the Fanatic is right up there in terms of speed. Comfort is good also with the heavily domed rails giving a great foot position, although you do get the feeling that the back foot could do with being a little bit lower, particularly on broader runs.

Unfortunately then, as the run comes to an end and you are starting to feel some love for the Fanatic Falcon, you gybe out, step forward and right into that recessed deck. Just as suddenly as he arrived, Mr Jekyll has gone and we are back with the not so lovable Mr Hyde. Unfortunately, the most dominate personality of the Falcon’s character.

If you are a strong, skilled speed sailor, who sails predominantly on ultra-flat water and consistently at speeds over 40 knots, then you will find the Fanatic an exciting and rapid prospect, with its light-weight, active ride and great acceleration. For everyone else, the drawbacks of the deck shape and the flighty ride at lower speeds (and in chop) will probably be enough to convince you to look elsewhere. There are other boards more suited to the amateur rider that will go just as quick, but without the drawbacks of the Falcon when it comes to usability and control. 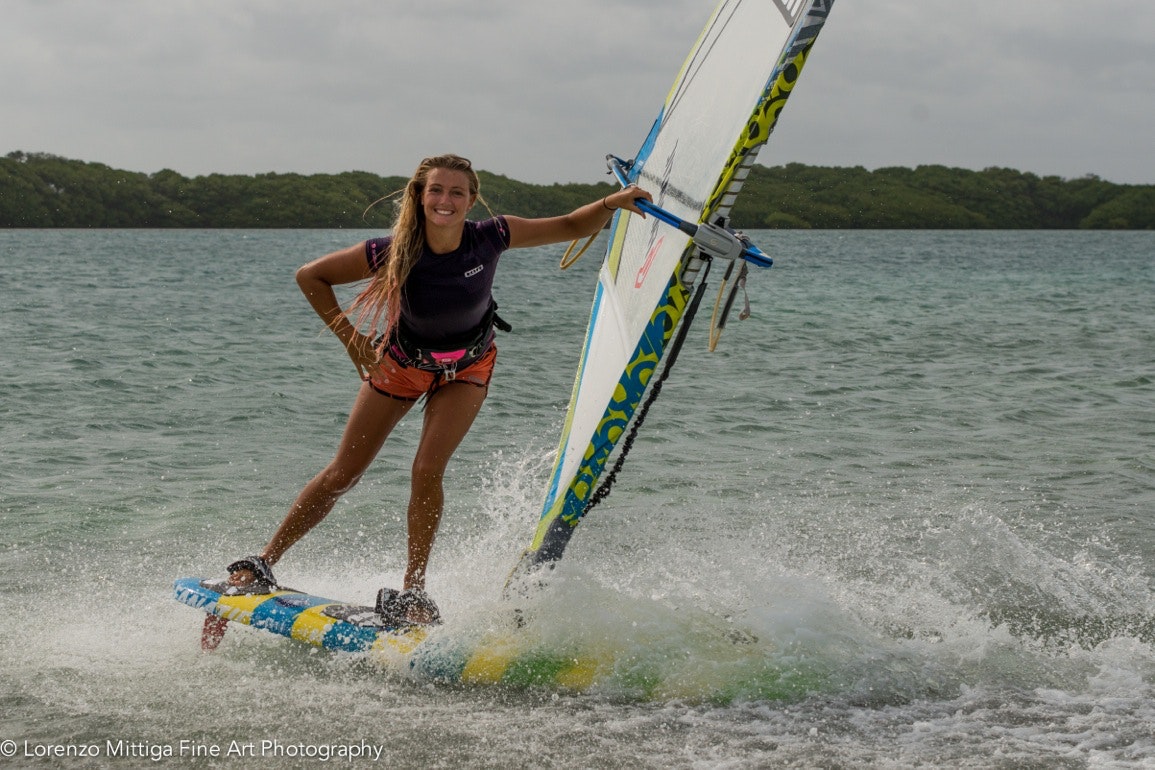 Maxime van Gent is a 19-year-old windsurfer from Bonaire who is pushing the top female freestylers on the PWA. Maxime has only been windsurfing for...

Maxime van Gent is a 19-year-old windsurfer from Bonaire who is pushing the top female freestylers on the PWA. Maxime has only been windsurfing for...