At the Olympics, just before the medal racers took to the water, Neil Pryde himself sat down with the media to talk about RS:X and the future of windsurf racing. Boards brings you the highlights from the discussion with Neil.

“The RS:X class was designed in 2005, it’s quite a few years ago now in terms of how sports equipment evolves and because it’s one design we as a manufacturer can’t make any changes in this equipment without the approval of the class. We know with the information we have today, we could make changes to this equipment that would make it better, stronger and more accommodating to the development that is taking place with the skills of the sailors. They have advanced, but because the equipment is stuck where it was when it was first designed we’re not able to move.

This is the frustration we have, because we know that if we were to design fresh today we would make changes, knowing now the skills the sailors have and the power they can generate from the rig we would probably upgrade certain aspects but that needs the class decision and we don’t control the class.

ISAF asked us in 2007 or 2008, I can’t remember when it was, asked us to come up with some proposed changes to improve the RS:X to make sure that the equipment remained relevant and modern etc. We then spent two years in evolving this equipment in small ways to try and achieve some performance improvements. But in the end actually, even though it was not adding any cost, the class decided they did not want to make any changes and wanting to maintain continuity as the class continued to grow on a global scale. So this is an example of how we are a manufacturer, in the end we are controlled by the class decisions and development.

We of course cooperate with the class closely. The class represents a huge number of vested interests, national authorities, coaches, etc, so when it comes to a decision on changing the equipment they all get involved. So it’s a very democratic and open decision. We understand where they are coming from, but it was a little disappointing to us that we launched a two year development programme to try and improve the equipment without changing the cost, but that in the end they didn’t go with it.”

If this is the end of the RS:X?

“I’ve made it clear to ISAF that we’re going to continue supporting it. We have a huge financial commitment, we’ve supplied all of this equipment here at the Games totally free of charge, we have half a million euro tied up in equipment at the Olympics. Plus we have another half a million euro for all the equipment we supply at the youth worlds, which was just recently completed in Dublin. We’ve always in the past been able to sell this equipment off at a cheap price to help developing countries get into the sport. With windsurfing being taken out of the Olympics we’re sitting here today with no way of selling and recovering a million euro. So that’s a pretty big commitment, I doubt there’s any other sailing company in these Olympics that have made such a level of commitment to the sport that we have. I do it because frankly I love the sport and it’s been a reasonably good business, but today we don’t make any money out of this, it’s a loss.

I believe in the future of windsurfing so we’ve promised ISAF that at least for the next two years we will go on supplying the equipment for the youth worlds because we believe in them. Straight after the decision we got an email from ISAF asking us what was our position for the future, so I went straight back and said yes, we will continue to honour our commitment because I think it’s the right thing to do. I believe windsurfing is still a fantastic sport and should be in the Olympic arena. To some extent yes that is throwing money away, but you have to have a certain belief in what you are doing too. Lets face it I make pretty good profits on the kitesurfing business and in normal circumstances we can invest this money in windsurfing. We hope it will be turned around.

But it’s a tough thing to sell to your share holders and to your owners of the company.

We have also brought out a new one design, a feeder class into the RS:X, called the RS:One so we’re still investing in windsurfing through that. We have the world tour racing series on the RS:One sponsored by Jaguar and in conjunction with the extreme 40 racing circuit. So we are still investing strongly in windsurfing, because I believe the future of windsurfing is going to lay very much in associating ourselves with the sailing community and yacht clubs. We see windsurfing as real alternative to the young kids coming through the optimist class. You look at the optimist class and it is the basic training boat, probably 70-80% of the kids coming out of this just disappear from sailing, there’s a huge drop out rate. We think this is largely because the follow on boats that are available to them are either too expensive or not exciting enough. With inexpensive, one design windsurfing we offer them a real option. We’re seeing this taken up in many countries, clubs and yacht clubs are looking to windsurfing as a way forward in the youth area. We have seen this at the recent ISAF Youth Worlds in Dublin where we ran windsurfing experiences on the lay day for the local sailors, the clubs there are looking at new windsurfing fleets to build on this.”

Views on the Removal of Windsurfing from the Olympics

“At a conference in Athens roughly two years ago, with the discussion going on we knew that there was some strength behind kitesurfing from some executives at ISAF to make this change for varied reasons.

Personally I think it’s a terrible decision. I’m an Olympic sailor myself, I’ve sailed in the Olympics so I have a very strong feeling about the level of the we see in the Olympic games and I just think this was a terrible decision. That’s a personal opinion, apart from business because I see what windsurfing has done for the sport of sailing in so many developing countries. We see this in Asia, countries like Singapore and Thailand have a whole group here. Taiwan are competing in windsurfing. We’re bringing young people into sailing, via windsurfing and this is something that has been totally ignored. The global reach, accessibility and participation in windsurfing is unrivalled and a key Olympic principle.

I think the Olympics is the dream of every young kid, to take that away is just a tragic blow. Let’s face it, sailing around in 470 dinghies isn’t very exciting either, but they do it because of the possibility and dream of going to the Olympics.

Our position is that we’re hoping windsurfing is going to be in Brazil in 2016, that’s our position today and we’re going to try and push that.

With the law suit, they came to us to ask for funds and we refused. With a business in kitesurfing too, to be honest it made no sense for me to spend company money doing this. But as I said, from a very personal view I am definitely supporting windsurfing.”

Kitesurfing is a fantastic and exciting sport, the brilliant thing about it is it’s portability. It’s a fantastic travel sport, you’ll see the marketing for most companies is beautiful pictures of islands and palm trees because you can put your kite in your back pack, your board under your arm and jump on an aeroplane and away you go. That is the beauty of kitesurfing. It has huge advantages compared to sailing sports which have so much equipment to carry around.”

Kitesurfing in the Olympics will not be one design, it will be a box rule allowing for competitors to use a range or equipment including custom gear.

“Nobody has quite figured this out yet, how it’s going to work. It will become an arms race, everybody will be looking to have the fastest equipment. The development and evolution will speed up dramatically, we see this already. Already the cost of boards, to participate in kite racing, are costing more than windsurfing boards. Plus it goes against the equal equipment sailor on sailor principle of ISAF and the Olympics.

When we started out with this, one of the commitments we made to ISAF is that we would have product distributed worldwide and available to everybody. A structure is in place to supply one design equipment to the class athletes and sailors on a global scale.”

“The legal action is a judicial review of the procedure, it basically calls into question whether ISAF have followed all the necessary protocol and procedures in reaching this decision. This is what the judge in the court is going to be asked to determine, it’s not to say that it’s a good decision or a bad decision, it’s whether the decision was taken correctly. I think the decision to take the judicial review was correct as at least the truth will come out. It’s not costing the class anything, the lawyer is handling this on a no win, no fee basis which I think gives you some idea of how confident the lawyers are.”

Refer to the press release published by the RS:X class which is very detailed and lays out the crux of the whole argument.

Click this link to go to the full press release from the RS:X class.

On the next page, take a moment to acknowledge the huge success of the RS:X medalists. 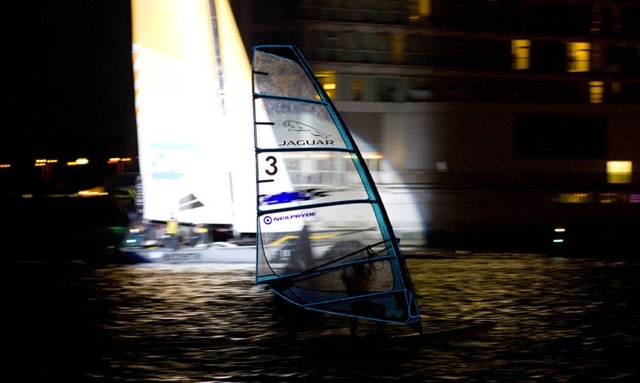 This weekend, a solid fleet of racers made their way to Cardiff to take part in the RS:One racing series sponsored by Jaguar. With many... As August draws to a close, the true British windsurfing events season is starting up! The first weekend of September sees the Extreme racing series and...

This weekend, a solid fleet of racers made their way to Cardiff to take part in the RS:One racing series sponsored by Jaguar. With many...

As August draws to a close, the true British windsurfing events season is starting up! The first weekend of September sees the Extreme racing series and...

The Worlds in Medemblik have come to a close, with some tight racing across all fleets. Boards caught up with coach Ian Roberts for a round...