The weekend of 22nd-24th April saw over 130 students flock to the Weymouth and Portland National Sailing Academy for an intense weekend of competition. It was all to play for – as results counted for both the students overall rankings across the SWA series, as well as BUCS points up for grabs for their universities. We’ll look at what happened in both competitions – kicking it off with the BUCS competition. With the potential to earn BUCS points for their universities, 41 competitors took to the water on Saturday morning for the advanced racing. There were 5 races, with one discard, with the course building in difficulty to a figure of 8 slalom course as the races progressed. Competitors in the advanced division were allowed a maximum 7.5m2 sail, and many chose to team this with longboards to take advantage of the 15 knot conditions. Coming out on top of the fleet was Rob York of Bournemouth, who was joined on the podium by Matt Barton (Exeter) and Nathaniel Warren (Southampton). First female was Saskia Sills of Bournemouth, who managed to finish 4th overall.

With 23 competitors taking the start line, the intermediate competition was going to be close. With consistency over several races key to success, it was a tough race. Coming out on top was Benjamin Wall of UWE who managed to hold off the competitors from rival club Bristol – Juliet Cairney bagging 2nd with Pablo Tarodo in 3rd.

The conditions on Saturday were ideal for the beginner racing, with the competitors taking part in heats throughout the morning. The top 5 competitors made it through to the final on the Saturday afternoon, giving them some time to perfect their gybes before the final. Top of the podium was Josh Wilkins from Swansea, who edged out his team mate Nick Harman. Rounding out the podium was Lucinda Wilkinson (Imperial)

Sunday saw the ultimate competition – the team racing event, run on the one-design kit of RRD FireRace 120L freerace boards and Tushingham Concept 7.5m2 sails. There were 17 teams entered from 13 universities, so teams were split into 3 heats, with just the top two advancing to the final. With the wind constantly shifting, it was a battle upwind to the buoy. In the end the top 6 teams, advancing to the final were Cardiff, Swansea, Durham, Birmingham, and two teams from Bristol.

With everyone watching on, Bristol 2 and Birmingham got off to a rough start, meaning it was four teams battling for the podium. Some excellent gybing from the Bristol competitors made the difference, and they bagged the top place with Cardiff not far behind. It was a separate fight for 3rd, with Swansea and Durham going back and forth as each team changed over competitor. Swansea just pipped them on the line to take the final podium position. 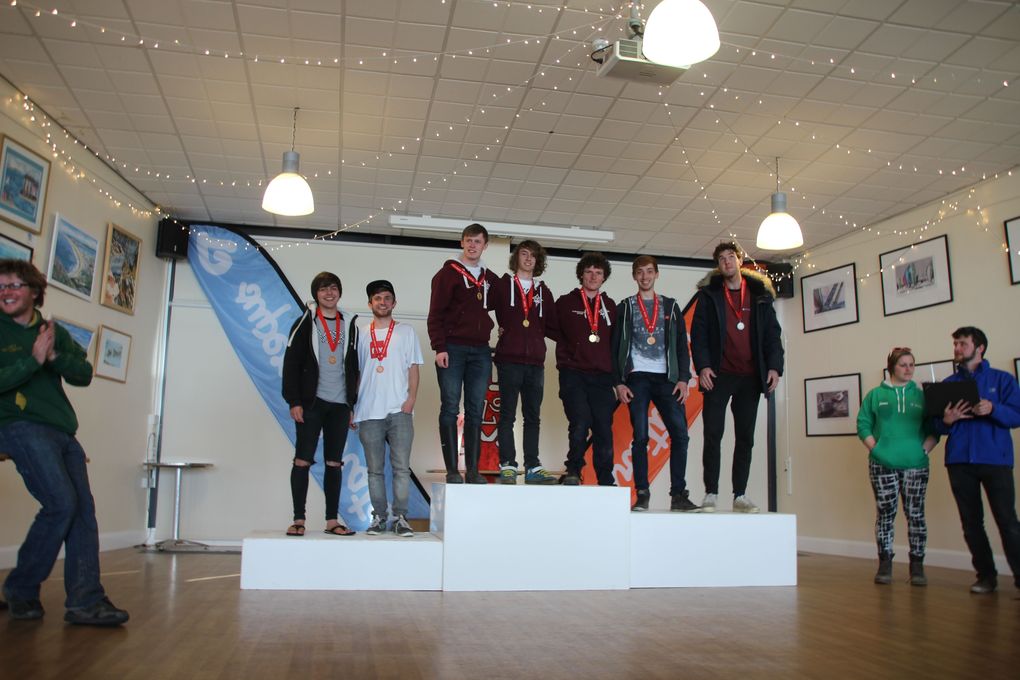 Thank you to everyone who helped out making the event a success, including Colwyn Bay Watersports, Boardwise and Weymouth and Portland OTC.

A massive congratulations to everyone who competed, and particularly those taking home BUCS points to their universities. Check back for the next article, when we’ll look at who came out on top of the overall SWA series – the ultimate test of windsurfing across the year! The weekend of 22nd-24th April saw 130 students flock to the Weymouth and Portland National Sailing Academy for an intense weekend of competition. It was...

Next weekend sees students flock to Weymouth from across the country for the final event on the Student Windsurfing Association calendar for 2015/16. This weekend...