With most events already set in stone, there are just a few that need to be confirmed. So grab your diaries and be sure not to miss out on what is set to be an incredible year for UK windsurfing.

One of the biggest highlights we can expect will be, without a doubt, the Olympics coming to town. Where we will see our top RS:X sailors take to the waters of Portland Harbour, to do battle against the worlds finest athletes, in the hope that they will take away the highest of all sporting achievements. An Olympic gold medal.

Aside from this, there will be the exciting BSA Slalom series kicking off in April at Hayling Island. Will Ant Baker hold his title for 2012 or will we some of the the young up-and-comers take the top spot.

Also in April, the UK’s freestyle fleets will hit the waters of West Kirby. Spinning into a whirlwind of moves on these incredibly flat waters, it is the perfect start to the new 6 stop tour (one event more than last year). The big question is who will be crowned freestyle champion by the time the tour finishes at Weymouth speed week in October. Will Adam Sims remain UK Freestyle champion for another year or will the likes of Oscar Carmichael (UK Junior freestyle champion), Max Rowe (PWA freestyler) or Andy ‘Bubble’ Chambers (3 times UK freestyle champion) take the title.

Then in May we see the start of the now legendary BWA 4 Nations Cup. Where the UK’s finest wave sailors will take on the biggest swells the Atlantic can throw at them. Ben Proffitt took the title this year but Phil Horrocks was snapping at heels all along the way. Will either of them be the 2012 champion or will Adam Lewis, John Skye or Andy ‘Bubble’ Chambers, who made a tremendous impact on this years Pro fleet, be crowned the UK’s number one wave sailor for 2012.

It’s a hard one to predict with such huge talent across all the disciplines, and we know we missed many names off the likely contenders for the top spot. So be sure to keep an eye here, as we bring you the highs and the lows, for what is shaping up to be one of the most exciting years ever on UK shores. UK Hotshot Nic Hibidge has uploaded his latest video from winter training in Bonaire. Nic was Junior Vice-Champion on the 2011 UKWA Freestyle tour and... 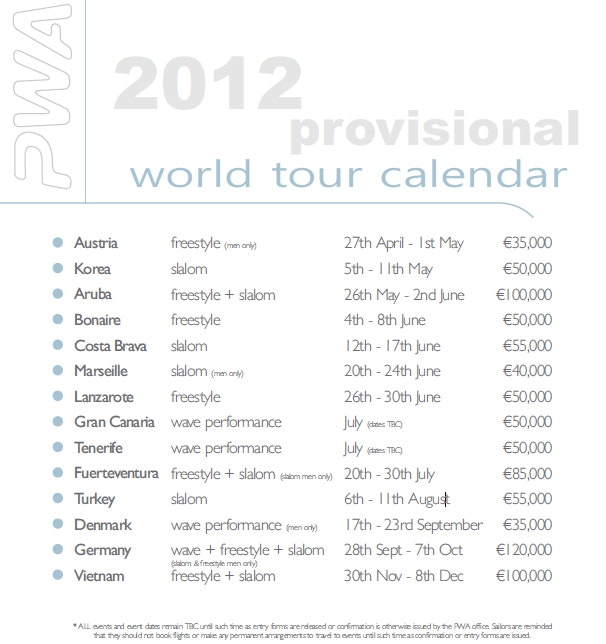 An impressive calendar from the PWA this year, note the change of the Vietnam event from the start of the year to the end, giving... UK Hotshot Nic Hibidge has uploaded his latest video from winter training in Bonaire. Nic was Junior Vice-Champion on the 2011 UKWA Freestyle tour and...

An impressive calendar from the PWA this year, note the change of the Vietnam event from the start of the year to the end, giving...