Many of you have had a mad weekend on the water (keep sending your pics through to [email protected]) but it seems Oisin van Gelderen may take the title for one of the busiest guys on the water. From one end of Ireland to the other, from waves to 45+ knot speed sessions, Oisin crammed it all into one weekend off!

Here’s the full story from the man himself:

It all started on Thursday afternoon, when we spotted the wind was suddenly going to hit Dungarvan speed course on South Coast on Friday – with a good tide. Up until then, I had plans for Donegal on the weekend. Thorpy was booking the ferry, so we knew the weekend would be good!

I check the Dungarvan forecast every day, in the hope to beat my PB speed set 3 years ago. It’s bloody addictive / frustrating this speed lark.

So, a couple of quick calls to cancel Friday dentist appointment, ditch work, then pack the van ready to head down early in morning.

Dungarvan was good – really fun sailing – but the wind was not howling as we hoped. But with 6 of us out (a crowd in Ireland!), and 15 degrees -you can’t complain with that! I got a couple of good gusts and got 45.5knots peak, so happy with that. No PB (I have to beat 47.9 peak), but at least the numbers are going the right way compared to the last few sessions there.

Then it was time to hit the road to Donegal, via home in Dublin for the night (it’s faster than the Sat Nav route, as there are more motorways). I hooked up with Gildas Bechet (who also drove up from Dungarvan) to check the new speedsailing spot at Bunbeg. I had found it on Google Earth, and figured from years sailing Magheroarty, that this spot gets the wind that Dungarvan lacks.

It was absolutely HOWLING, about 45knots, so we slowly rigged and got everything to the beach ready for the tide to drop.

While waiting, also saw Jim Crossley’s amazing West Kirby Speeds being posted on FB while waiting – which turned up the excitement / motivation a few more notches!!!

However, once on the water, the wind turned out to be too broad and the water was rough, so we had to sail the shorter inside course which was a bit of a mission, trying to build up speed to slingshot into it with any kind of control.

Again a 45.5 knots peak… which on a ‘bad day’, was a result all the same. Was sailing on 5.4m Evo5 again, same as Dungarvan… but with a shedload more wind.

Crashed out that night in Letterkenny, absolutely totally knackered! Thorpy, Lecky and Jony Price had gone to Easkey coast, and then headed up to meet the next morning at Magheroarty.

Sure enough, Magheroarty was pumping well over mast high on the reef, closing out across the bay in the sets. Timo was already out, Katie and Finn were on the way. Jony and Lecky were on the water while Thorpy did camera duty, but there was so much wind combined with a huge amount of water moving around, that it was tricky enough to catch a clean one in control. Lecky and Steve got a couple up at the reef, and then we all sailed the punchy beach break, joined by Finn and some Dublin mates – Brían and Mark Grennan.

I had a short session on 3.6m (stacked), taking Timo’s advice to catch the smaller ones as they were cleaner… unless of course a bigger one caught up and doubled up the one you were on. It was pretty tricky but bloody good to be out with the crew. I couldn’t help thinking that the better direction wind would clean up the speed course (20 minutes away), so I packed up the wave kit and headed back over to Bunbeg to check it out. Sure enough, the course looked completely different, and I couldn’t resist it. A couple of local friends came to watch, which was very welcome – should I totally stack it and kill myself. 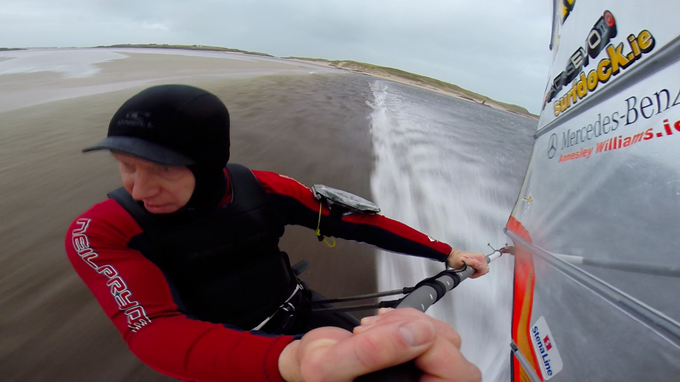 The course was much flatter this time….. just incredible in fact. But I was far too knackered from all the sailing already to do it justice.

A violent squall came through even stronger, and I had a hard time keeping my kit on the beach.

Got a second run again with 44knot peak, and headed in while the going was good. At this stage it was nearly 5pm.

I may not have beaten any PBs, but feel like I have found speedsailing Nirvana.

25 minutes from my favourite wavesailing spot in Ireland, and in stunning location – that is windy as hell. This place is going to be good 🙂

What a mission! What a weekend! Need to go back to work just for a rest 🙂 Oisin van Gelderen breaks Irish 10 second speed record! Oisin has racked up a lot of hours on the water of late and it certainly seems... Starboard rider, Sarah-Quita Offringa, the Queen of freestyle and probably the best overall female windsurfer around, is looking forward to a new year with a... Adam Sims presents LIT, a showcase of some epic freestyle with himself, Balz Muller and Steven van Broekhoven. http://mpora.com/videos/AAdzgktnrn36 “It’s been a long time coming but I’m...

Oisin van Gelderen breaks Irish 10 second speed record! Oisin has racked up a lot of hours on the water of late and it certainly seems...

Starboard rider, Sarah-Quita Offringa, the Queen of freestyle and probably the best overall female windsurfer around, is looking forward to a new year with a...

Adam Sims presents LIT, a showcase of some epic freestyle with himself, Balz Muller and Steven van Broekhoven. http://mpora.com/videos/AAdzgktnrn36 “It’s been a long time coming but I’m...

The one word title of this video says it all. Giant was filmed on big thursday at the incredible Nazare wave in Portugal. One of, if...