If you just want a quality drone that comes ready to fly with everything you need and takes first class aerial video and photographs then there are some great options available. Some of the current ‘plug-and-play’ drone options come with on-board cameras whilst with others you need to add your own action camera. Many drones for the amateur aerial photographer are designed to take a GoPro camera or equivalent and will allow you to use them in a lot of different situations, not just for extreme sports. If you are the sort of person who likes to upgrade your VW Transporter, or your mountain bike, then you might want to go down the custom drone route where you can evolve and adapt in the future by adding different sensors, functionality and payloads. It is also worth noting that branded spare parts, including batteries, can often be relatively expensive, whereas ‘standard’ RC hobby parts are much cheaper. For extreme sports and aerial photography it is probably important to have a GPS enabled drone whatever your choice. There are many plug-and-play drone solutions, but DJI and 3DR are the market leaders for a reason and both companies also design, build and sell flight controllers, frame kits and parts which deliver awesome options for the custom drone enthusiast and for professional photographers. Whilst the DJI Phantom might be the obvious choice for many, the 3DRobotics Solo might be described as the inspired choice if you want a similarly priced drone with lots of aerial photography bells and whistles, including the all-important ‘Follow Me’ function. The DJI Inspire delivers professional photography quality results but is significantly more expensive.

You cannot really go wrong with a DJI Phantom. They are really easy to fly, great for aerial photography and everything you need is in the box including the transmitter. Depending on which version you buy, a Phantom 3 will cost between around £450 with a 2.7K camera and about £1200 for the version with a 4K camera. The Phantom 3-Pro boasts a vision positioning system, long range HD video streaming (using DJI Lightbridge) and a Smartphone App to control the camera. The new Phantom 4 boasts functionality which competes with features on the 3DR Solo with the added benefit of an ‘obstacle avoidance’ function, although this only ‘parks’ the drone waiting for operator intervention if it detects an obstacle, unlike Intel’s collision avoidance system which will fly the drone around the object and is due for release later in 2016. Prices for the Phantom 4 start at around £1300. Be aware however that a spare DJI branded Phantom 3 battery (3 cell 4480mah LiPo) will cost around £125 which is about 3 times the cost of an equivalent battery for standard radio control use and you will want more batteries… Staying with DJI and looking for outstanding professional quality performance then you will need to spend between £2400 and £4000 for an Inspire and as before a DJI Inspire spare battery will cost around £160. The Inspire does however deliver exceptional quality aerial photography and video, so worth the price if you can afford it. 3DRobotics are an interesting company based in San Diego and they have supported and facilitated the development of the open source Arducopter software for flight controllers. Their drones benefit from this advanced functionality which is constantly and rapidly evolving. The 3DR Solo is a dedicated GoPro drone and uses 2 on-board computers – one for all aerial photography processes and the other to manage the flying of the drone. The Solo is capable of autonomous flight, it can ‘Orbit’ a structure or the action below, fly the drone in ‘Follow Me’ mode, take an autonomous selfie or lock onto a virtual cable flight path (Cable Cam) so you do not always need to physically pilot the drone and can concentrate on operating the camera and getting the best footage. The Solo App, like DJI’s Lightbridge, lets you stream your HD video and manage your GoPro in flight whilst the controller has a 1Ghz computer on-board to allow you to adjust and save camera positions, change sweep speeds etc.

Solo drone prices have just been reduced and a drone with controller will only cost around £790. The Solo also has the advantage of some future-proofing in its design so you will be able to upgrade to a limited extent as time goes by. As with DJI, the need to use dedicated batteries will set you back around £130 for a spare. 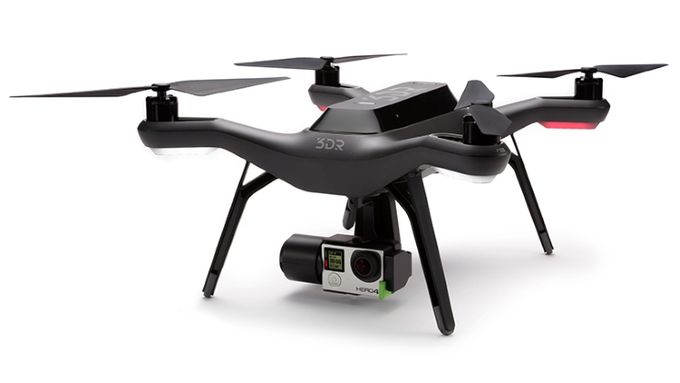 Once you enter the domain of custom drones then everything can start to get a lot more complicated as there is a plethora of combinations possible from a multiverse of suppliers. At RNDrones, after much trial and error, we focus on building carbon fibre framed rigs, because they are the most rigid and provide great stability as well as being capable of loading with additional radios, sensors and (my personal favourite) flashing lights. We use the APM and Pixhawk flight controllers as these use the full version of the Arducopter software and importantly allow autonomous flight missions to be planned, uploaded and executed using simple software. Whilst each drone can be physically specified to a customer’s needs, they all benefit from the Arducopter development programme which is not limited by the constraints on financial and intellectual resources influencing many classic R&D departments. 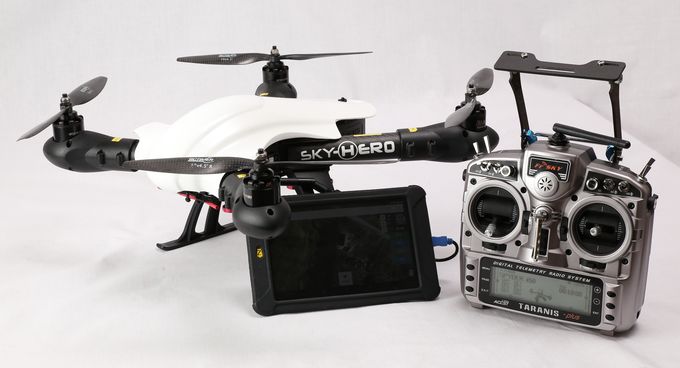 Our drones can be controlled using just a standard RC transmitter which will allow access to 6/7 flight modes, gimbal control etc., however if you are more adventurous then with the addition of a laptop, a tablet or a smartphone, (and in some cases a smartwatch), and the free Mission Planner or Tower Application then you immediately have access to an extensive range of sophisticated functionality. You can plan autonomous flight ‘missions’ at your desk or in the field, choose between 15 different flight modes, automatically take ‘Dronies’ of yourself, engage the Follow Me mode, or if aerial photography is the order of the day then the flight controller is capable of advanced ‘Region Of Interest’ (ROI), Circling, Aerial Surveying and 3D Structure Scanning photography via your ground station software as well as accessing a gamut of tuning options and data feeds. Typically, custom drones are less expensive to repair and components can be swapped between frames as your needs grow and develop. About a year ago, social media was buzzing with the Kickstarter drone projects promising dedicated extreme sports drones and the time has come for these to hit the consumer market. They are designed specifically to follow you over snow, sea, sand and land simply by throwing them in the air or hitting a couple of buttons on a portable device. They are designed to be robust and easy to own. However, in terms of functionality and also in terms of flexibility you are really buying a stripped down version of the 3DRobotics Solo and DJI Phantom so it’s important to decide whether you will only be using your drone in an extreme sport situation for ‘Dronies’, particularly given the prices. Of these extreme sport drones, Airdog and Lily are perhaps the best known.

The Airdog is a well-designed, compact, folding drone aimed squarely at the board sports community. It is the result of a collaboration with ETH Zurich University and uses a some of the functionality of 3DR’s Pixhawk flight controller linked to a wrist worn, waterproof ‘Airleash’ device which allows you to selectAction Sports Flight Modes, height etc. The drone follows the wrist controller as you power over water, snow, mud or asphalt. Full camera control of a GoPro camera is an upgrade and the Airdog claims some impressive capabilities including: flight-capable in up to 28knots of wind, a top speed of 42 mph and a range of up to 820 feet from the wrist unit. Whilst the Airleash controller is waterproof, the drone is only described as ‘weatherproof’. If you want one it will cost you around $1600 from the USA and you will probably have to pay import duty on top. They did a cool Christmas windsurfing promotion video which shows off the drones capabilities:

The Lily drone looks extremely well designed and will be made of black polycarbonate and brushed aluminium, with folding propellers and an inboard camera. The original release date of May 2016 has now moved to ‘Summer’ 2016. The Lily is the ‘throw behind you’ drone you might have seen in this video: https://youtu.be/iMfTHHLbj5g Unfortunately, apart from this promotion video there is nothing much else to show at the time of writing. It will have a price of $999 and if you pre-order there is a $100 discount. We look forward to seeing some user footage.

Make sure you keep your eye out for our epic teaser for next weeks special.

The mecca of Maui is a proving ground for the worlds best windsurfers and at this time of the year the island receives huge swells...