These weekend the BWA took to Cornwall for the final event of the tour, full reports and results below:

Since the BWA returned to Gwithian in 2009 this break has consistently delivered and 2014 was no exception. 70 of the UK’s top wavesilors descended on Peters point for the final round of the tour. Critically, the results of this event determine the final Championship results.

Day 1 was a dedicated Pros day but the waves didn’t arrive with enough power to contest. With improving swell on the forecast, Head Judge Ian Ross made the decision to hold off until Saturday.

Day 2 brought bigger waves and a solid South westerly wind. Competition commenced at 10.45 with the Youths hitting the water first. By 5pm 70 competitors had competed in the event with final results for the Pro, Women and Youth fleets.

Day 3 brought lighter winds but more swell. With only 2 final heats to run the Masters and Youths remained on standby for the day whilst the judging team waited patiently for a chance to start the event. By 2.30pm the skies turned menacingly dark and the judges jumped on the chance of heavy squalls to get the Masters into the water. And it paid off as both Ams and Masters were able to complete their finals before the sun came out and the wind deserted Peters Point.

3 days, 70 Competitors and 35 Heats completed this event has become one of the best organised and well-attended wave events on the BWA tour. The event also received fantastic volunteer support and a very warm welcome from the locals. This event is sure to continue for years to come.

It was always going to be fierce in the pros with only 1 Championship point between Phil Horrocks (Gaastra,Tabou) and Ben Proffitt (Simmer,Simmer). Cornwall also brought out the big guns with Adam Lewis (Fanatic,North) hopping in from the Canary isles. Graham Woods (Goya) made a comeback after 5 years away in Oz and of course local Guru Andy King (Goya) came to party with a history of podium finishes at this event.

As it turned out King never got his game together and went out in the first round to Aleksy Gayda (RRD,RRD) who was on fire following his recent 2nd place in the Tiree ‘Quickening’.

Woods also put in a solid performance to share 5th with Gayda but it was young Horrocks who was to make it to the finals with big bro Phil, Lewis and Proffitt. As the final four got underway it was Phil and Dave Horrocks who were markedly commanding the heat with outstanding waveriding. It looked for a time that it would be a Horrocks double win until Dave fell victim to a bruising wipeout to emerge with a broken mast. Helpers on the beach of kit caddied replacement kit to David but it was too late as Proffitt and Lewis seized the chance to gain valuable points. By the end of a frenzied 10 minute heat Phil emerged the victor with a convincing performance. Proffitt took second and Lewis narrowly behind in third.

With 3 events in the UK completed, Justynia Sniady (Simmer,Simmer) and Sara Kellett sat in first and second and looked favourites at this event. Megan Gayda and Ping Ling had missed the Tiree event and so they were to have their own personal duel in the battle for Championship titles. With wind and waves building the women made enthusiastic use of the conditions and it soon became clear that it was going to be close. But it was another solid performance for Sniady to take her third win of the year. Taking second place, youngster Kellet has become one of the most improved sailors on the tour and is bound to join Sniady before too long on the PWA tour. Like her big brother, Gayda was on fire here and her experience in Brandon Bay was showing as she took the third place to leave Ping in fourth.

Once again the event organisers had to cap the fastest growing fleet of the tour at 32. Leading the tour, Mike Archer and Mike Wand Tetley had their eyes on the prize as bad luck befell Ben Page who is has an arm in plaster. Nial Mellon made the monster trip from Brandon Bay, Cornwall regular Will Barrett had his eyes on another podium finish with Gregg Dunnett attending his first BWA wave event. Lewis Merrony also returned after a year break. But it was shocks all around as both event favourites Archer and Wand-Tetley failed to advance from the semis to the final. In the final Mellon and Merrony proceeded to take every wave to pieces showing once again that both deserve a promotion to the Pro fleet in 2015. Mellon took the win with Will Barrett in 3rd and an excellent fourth place for Dunnett.

Three of this years youths sat with equal Championship points going into this event and it was soon clear that despite their young years this fleet was ferocious as the Pros and none were put off by the building waves. James Arnell Smith was making his first BWA appearance and did well to also make his first final. ‘Ams crusher’ Freddie Ide has had a great run so and is always on hand to give the pros tips! But it was not to be his day as Jack Petit and Fin Mellon battled for the top two places. Watching all the youths you would easily be convinced you were watching the top Ams with a comment from one bystander of “These boys would woop Andy King the way he sailed yesterday!”. With slashy top turns in the final moments of the heat it was Jack Petit who moved slightly ahead on points to take his first win with Fin a very respectable second and Freddie in third.

It is very clear that the future looks bright and you can expect to see any one of these youngsters following Freddie Ide to the PWA tour before too long.

In the hotly contested Masters fleet, Tour leader Craig Hamilton started the event well but came unstuck in the 2nd round as Plymouth lad Dave Ewer once again commanded the waves. New to the tour in 2014 Kyle McGinn and Daniel Ramsden were also looking for podium results but it was local lad Justin Dennington that was here to spoil their party. A previous winner of the Cornwall event, Dennington looked at home in the Towans break but it was Ewer that sneaked ahead with bigger wave riding to take his second win here. McGinn took third and a cheery faced Ramsden gave a great account in his first Cornish Classic to take fourth. 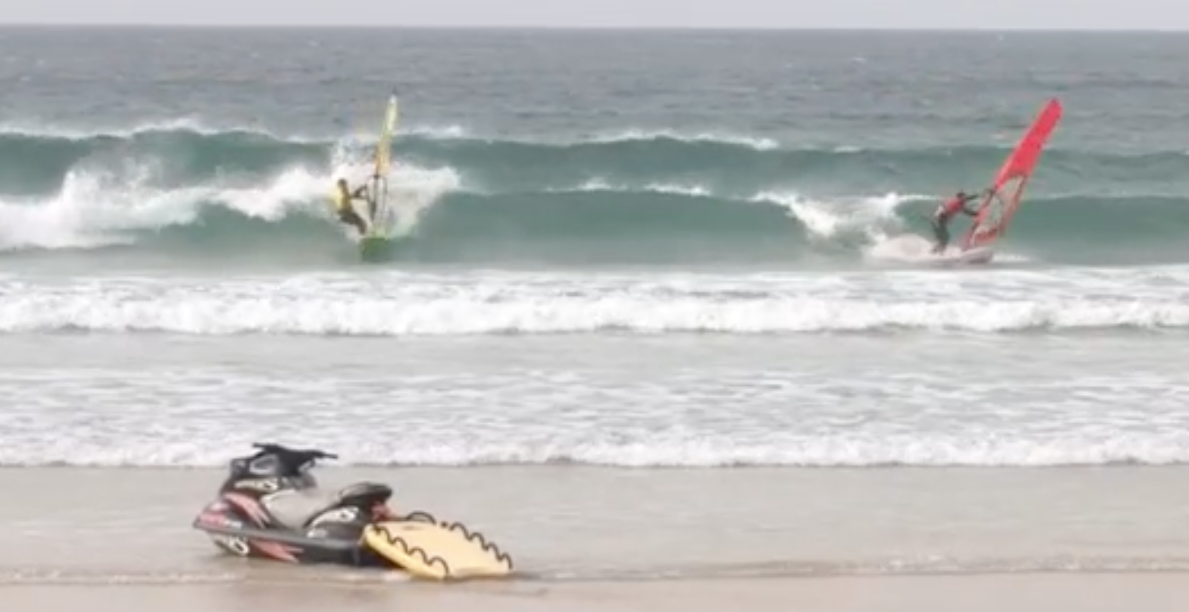 Nigel Treacy steps down as Tour Director for the BWA, to be replaced by top competitor Geoff Hautman! Geoff catches up with Nigel to say...

Nigel Treacy steps down as Tour Director for the BWA, to be replaced by top competitor Geoff Hautman! Geoff catches up with Nigel to say... Massive congratulations to Phil Horrocks who takes the 2014 BWA Pro title! Words from the man himself (via Facebook!) “British Wave Sailing Champion 2014!!! Yeeeees!! Another year of...