Just days after windsurfing is reinstated as an Olympic sport for Rio 2016, British Silver medalist Nick Dempsey announces that he will continue his campaign in an effort to become the most successful Olympic windsurfer of all time. Dempsey shares his thoughts on going for gold and enjoying kitesurfing on his new blog.

It’s obviously been a massive few weeks for windsurfing after the RS:X class was reinstated for the Rio 2016 Olympics at the ISAF Annual Conference in Ireland.

Everyone just assumed I’d immediately jump at the chance to do a 2016 RS:X campaign but the truth is I’ve spent a good few days this week thinking about whether that would be the right thing for me. I had to question if I wanted to do it and whether if I did do it, would I be able to do everything required of me to win a gold medal in Rio.

But after a lot of really good discussions this week, with people who’s opinions I trust and respect, I made the decision to go for it. The British sailing team manager, Stephen Park, made a really good point that if I won gold in Rio, I’d be the most successful Olympic windsurfer ever. That definitely made the thought of doing a campaign more appealing.

When it comes to age, I just look at athletes across all sports to know that there is nothing wrong with the body at 35. Ben Ainslie was 35 when he won his fourth Olympic sailing gold medal this summer. The Greek windsurfer Nikos Kaklamanakis was 36 when he won silver at Athens 2004 and look at the Ethiopian long distance runner, Haile Gebrselassie.

What I do know is at 35, and having done four previous Olympics, you’ve got a bloody wise head on your shoulders and you are very experienced. You know how to do it.

I also spent a lot of time training in Brazil before the London Games. I love Brazil, I know the waters and the fact it is a light wind venue means certain parts of your training can be a lot more controllable than they were for Weymouth. In Weymouth you had to be prepared for anything and everything, Rio will be more like Beijing in a lot of ways.

I’d tried to keep it low key but for the past two months I’ve been out kiteboarding pretty much every day in Weymouth.

I’d never done the sport before but everything everyone had said about windsurfing skills being easily transferable to kiteboarding was right. I got the hang of it pretty easily and towards the end felt I was close to starting to race. More importantly I absolutely loved it. I was ripping it and was really excited about the potential that was there.

During the ISAF Conference there was the suggestion that they were going to try to go for mixed kiteboarding and mixed windsurfing events as a compromise. There was a good chance that was going to happen and although I didn’t really think mixed racing was the best way forward I was okay with the idea because it meant both sports would be in.

My dad is President of the RS:X class and he has been working really hard on trying to get the class re-instated for 2016. So when I was saying to him, “I’m really enjoying this kiteboarding,” it was quite difficult!

When I heard, like most people do nowadays via Facebook, I had a bit of a mixed reaction…..Head to Nick’s Volvo Sailing page for the full blog post. 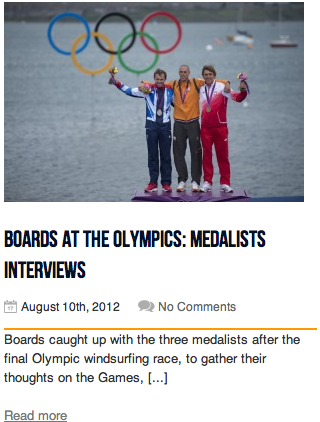